A little tardy for this one as it’s been a busy week.

A week or so ago, one of the worlds more famous motor racing events was going off round at a little track in the middle of France, packed full of superstars, world champions and enough glitz and glamour and fuss than you could shake a stick at.

I didn’t go, not being able to take the time off work, but I did pay the handsome sum of £9 to be able to watch the drama unfolding on my phone…I managed about 8 hours of viewing all in all. Top value.

It was good, although I didn’t think it was as riveting as last years race, and I have to be honest, not many of the images I have seen back from the weekend have really smacked my chops, so I was a little disappointed.

Still a pound-an-hour or so of viewing can’t really be sniffed at for one of the ‘Blue Riband’ events of the motorsport world.

For the rest of the weekend, apart from sleeping, I was at Silverstone, again, to sample the delights of the HSCC’s international trophy meet.

I enjoy the HSCC meets as you never really know whats going to turn up and run. I spotted that some historic Formula 2 and a few Formula 5000’s were attending, which are always entertaining to photograph and watch. If I had actually read the entry list properly before venturing out, I would have also noticed that I had an endurance race of my own to cover; a fine selection of pre-1980’s can-am style beasts were also rolling, weekend wide.

Despite my lack of observation, I made a plan for the weekend and decided to concentrate on the open wheel racing first. That meant being up at the circuit for 10:30 on the Saturday and about 9:30 on the Sunday, to make the most of the generous accreditation I had been afforded from the HSCC. 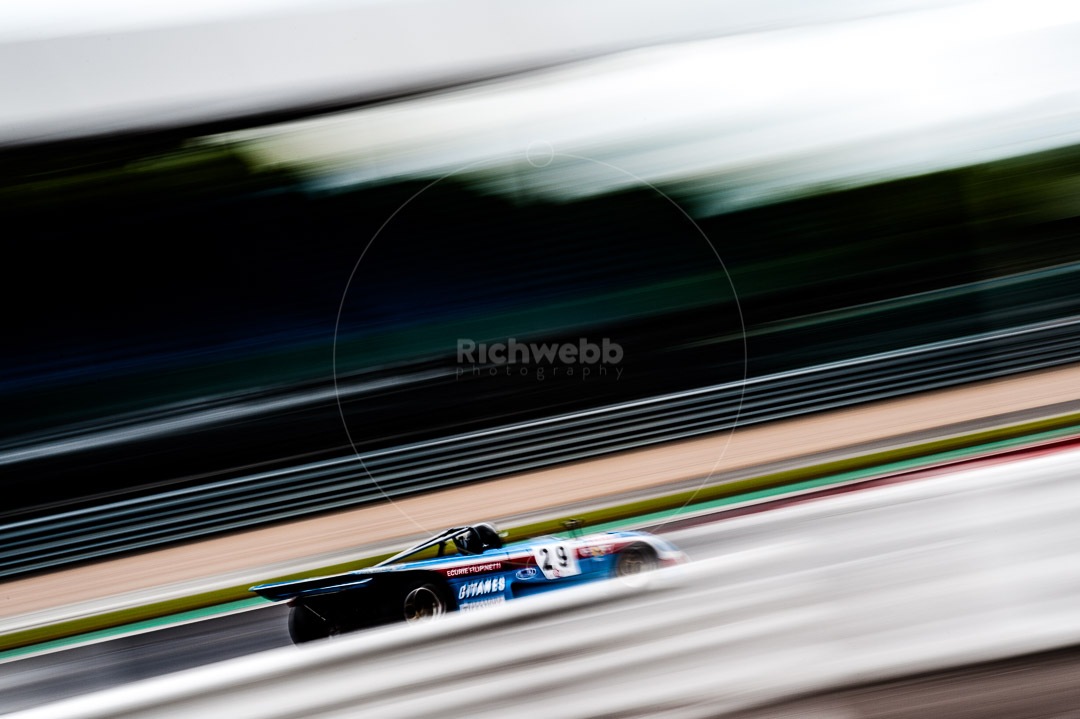 Got there, did my thing, went home both days. Saturday was a busier day than the Sunday, as the novelty of walking about the pits and paddock on the first day had worn off a little by Sunday afternoon. I shot what I wanted to, and couldn’t really see the point of relentlessly shooting for the sake of it, especially as it was  a bit grey and flat.

My approach was purposeful. Is that the right attitude? It would seem not, as the photographers at Le Mans all appeared to puff a lot of chest about how little sleep they have had, like they were also on endurance.

To experience it and capture it, you have to immerse yourself in it.

That may be, but I get grumpy and lose concentration if lose out on lunch, never mind sleep. If I haven’t slept well, then you may as well give a camera to an angry bear. In my experience, you don’t perform if you’ve had no sleep, heck if you are tired even, regardless of your physique or preparation.

Lack of sleep when you are trying to perform to peak levels in a physically demanding job, in a rapidly changing environment is inefficient. It doesn’t work does it?

I once drove down to Austria and didn’t sleep for 22 hours. It was pretty stupid and bloody dangerous, because as the sun started to to come up at 6 in the morning, the cans of Redbull deemed ineffective, I started to hallucinate, had to stop and get one of my snoring sidekicks to share the driving love. And that wasn’t even for work!

So while many threw high fives and props up to the photographers who busted a gut to shoot familiar pics of the 2018 Le Mans like it was some badge of honour I once again wondered if that is a good way to approach taking images of anything, never mind cars.

Certainly not on that evidence.

Fair play to those that went the distance round Le Sarth, but rather you than me. For the time begin, I’ll stick to the HSCC, some aged screamers at Silverstone.

And a decent kip.