Alright, I can’t quite get the Small Faces lyrics to fit in, but I gave it a go!

Sunday at Silverstone was a ripper as far as the weather was concerned. Possibly the best day I’ve had there, ever. Shorts, tee-shirt, rocking the shades , not a cloud in the sky and a late afternoon grid for the three hour Blancpain Endurance, meant that the light for the end of the race should be golden. Even the wind relented. A Silverstone spoiler no doubt!!

I found it quite refreshing too, attempting to photograph a few track hugging modern boats as they growled their way around the full loop. The last few visits to the ‘Stone have been on the National track, half the circuit, which limits photographic possibilities as it cuts out several smart areas of the track that are good for the odd click; Club, Stowe and the infield Village complex were all back on the cards.

But as Silverstone is my local, and how I find it’s vistas a little familiar, I thought up a plan for my Sunday shoot.

Not often do I go out to shoot races with a plan as such; I like to jazz along, casually looking about for sights that catch my eye and see if I can capture them to my taste, but today, due to the weather I gave my approach a little thought on the journey to the circuit.

To keep my mind off that familiarity, I try and mix up my approach on each visit, and this year I’ve so far done quite well in the application of different techniques. But the events I’ve attended so far this season, haven’t been to the scale of the Blancpain, and I knew that any close up opportunity that you get at a classic event say, would be very limited.

So how do I mix it up? There had to be only one way. Slow. Very slow. 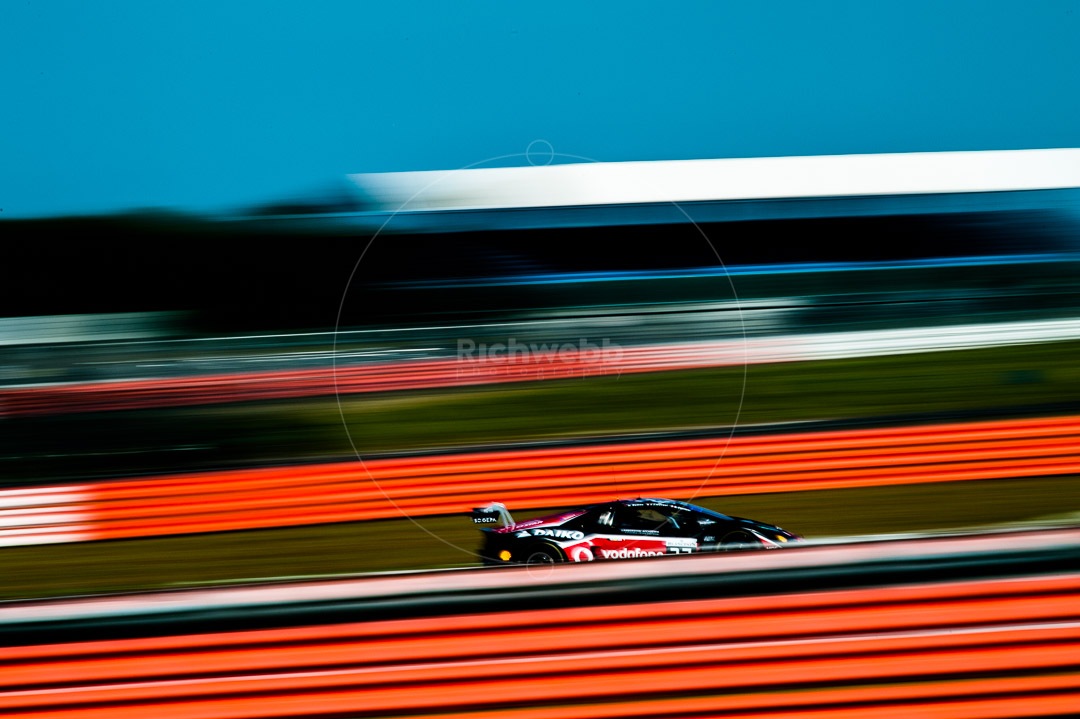 Now I find slow shutters on a bluebird are not the norm. In fact I think they are tricky. Darn tootin’ tricky be exact.

Brightly lit scenes often mean contrast and high shutters are necessary to help control those differences. You might not choose to go slo-mo on such a bright day, due to the camera not being able to handle all that light.

Keeping that shutter open long enough to get some decent motion that isn’t over exposed requires those tricky filters or clever manipulation of your camera, especially out in the open; but it can be done. I’ve seen it.

And that was my plan. To go all out motion blur and attempt to capture the GT’s of the endurance in full flow around the International, behind the fence.

I would like to say it was easy. But it wasn’t. I managed about 10% success of three 8gb cards shooting raw. Work that out when each card holds about 350 frames.

Not many, huh, and they were the images that made the initial pick…yeesh!

The realisation that hitting 1/10th of a second under nuclear rays and that the everything had to be as slow and as steady as possible hit quickly. That then also began to show up certain limitations in my aged gear to record the light, as well as my own limitations.

Highlights dance like white gloved ravers if you aren’t steady with your technique, and measuring how the sunlight falls in your depth of field is all important to the final composition. Get too much highlight in the foreground and your composition may as well burn.

But pushing that limit ability and understanding, as well as that of the camera, frustratingly made it more fun as my determination to bag scenes grew with each failure, and there were a lot of those, especially when you consider I was shooting though a fence that caught more sun than the Costa del Sun.

It proved once again that exploring your photographic ability on the sunniest of days at Silverstone is a real test. Take it on the chin and knuckle down, it all comes good in the end.

I wouldn’t have it any other way. Check out the gallery below to see how I did.