This season has started slowly, which feels odd, considering how many events I appear to have listed in my calendar.

As I spoke about in the last blog, I’m keen to seek out new subjects and different locations, to save myself from too much repetition. It’s not that I don’t enjoy the photography, I am just very wary of producing the same images, stood at the same circuits, shooting very similar subjects.

So after a bit of thought, a couple of well received conversations over the social media waves ( thank you to those folks if you’re reading ), I made a conscious decision to keep on.

But instead of plumbing for the usual, I’m going to try and seek out a few alternative subjects, try a few different locations and hopefully adapt a bit.

First up on the calendar was the HSCC opener up at Donington Park.

While most headed south to the familiar grounds of Brands and the BTCC, I rocked on up to Leicestershire, in search of dryer climes and more varied subjects.

If you followed the blog last year, you may have noticed that I didn’t really reach out further than Brand Hatch, Silverstone and a trip to Goodwood.

This season, I’ve already been to three different locations, with the aim of trying to capture different scenery and adapt my photography to suit, which have all offered a wealth of different subjects on the track.

In that respect, is good…but a huge factor that I can’t not notice is that this green and pleasant land, is remarkably similar everywhere you go, especially when restricted to the angles and accessibility behind the fence.

Creativity was last seasons aim. This years, therefore, has to be either technique or location, and I’m fresh out of funds for new locations to shoot. Technique it is then. 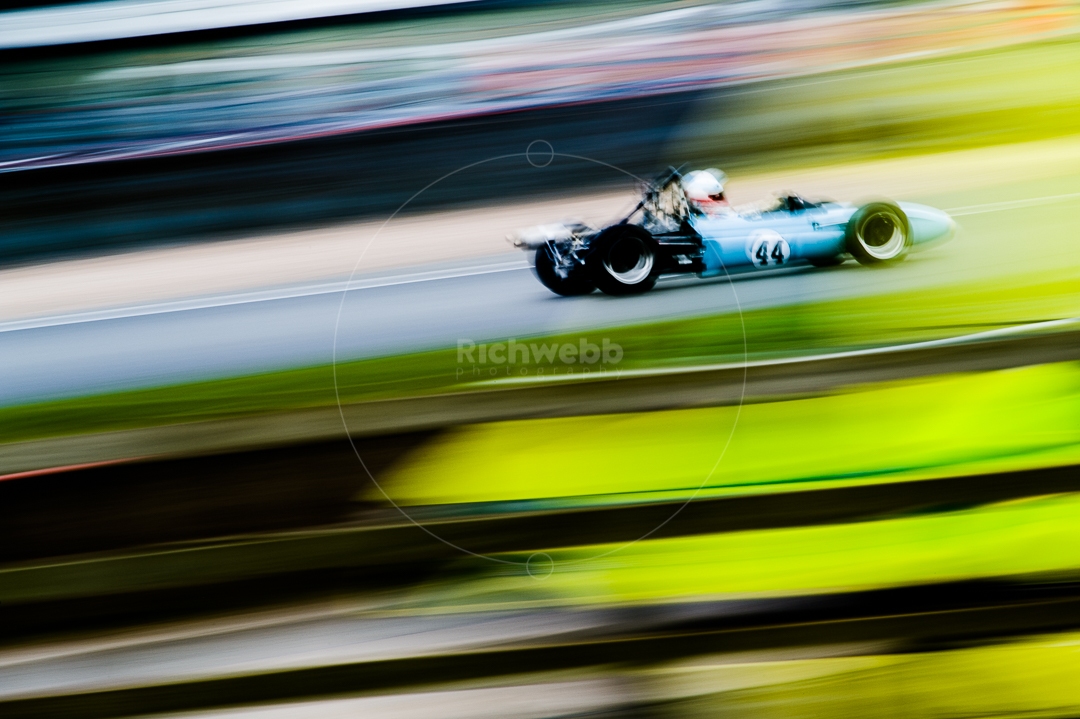 One area of my images that I very much enjoy is panning. You may have noticed.

I’m of the opinion that panning is the essence of a decent motorsport image. Done well, they encapsulate what is going on; Racing.

Done poorly it can look like your excited dog ran after the cars with the camera on it’s back.

I’m learning that there is heaps of technique involved in this fabled art, and that takes an incredible amount of practice and learning. But there is also a lot of perception involved. By that I mean the ability to creatively judge how elements in frame may appear, smudged across your sensor; before you shoot, after you shoot and while you shoot.

There’s quite a bit of opinion out there that a panned image has to be crisp. It has to be in the direction of travel, it has to be level, or focus on the point of interest, especially the drivers head.

In certain cases yes, I don’t disagree, but as we all know well, what looks good to one person, may look wack to another or hang-it-on-the-wall worthy to the next. It’s merely opinion brought about due to a certain stipulation.

The point is, a panned shot isn’t necessarily about the drivers skid lid, or keeping the motion horizontal or steady.

A panned shot is dynamic, just like the action being shot shooting, so why not get fruity?

My only real caveat is that the image has to make sense, there has to be a certain impression gained; a recognition, subtlety or understanding.

If not, I feel that instead of a creative interpretation of movement, you end up with that smeary splurge of drunken party picture antics… yeah, we’ve all been there.

Panning is a world of abstract interpretation that deserves to be utilised readily. But it still has to look good.

Enjoy a varied gallery of snaps from the HSCC opener at Donington, with a couple of pans of course!