The Enduring Greyness.
A Blurred Background.
2017 Events 1st May 2017
Share

I try to challenge myself every time I step out with my cameras. After my first year of shooting motorsport, I’ve made a conscious decision to be a little more adventurous with my images, get a little more abstract and to try techniques that may not come off.

Harder angles, slower settings, to try and make those routine elements of a weekends motorsport that are a little more out of the ordinary.

Whether I’m going to be able to find this variety from behind the fence is a separate challenge altogether, but at least it presents me with fresh challenges at each event I visit.

I have found it’s very easy to fall into the “same old shot” trap at locations you have visited before, especially if you have managed to bag a few favorites.

Taking the easy option and revisiting locations where you managed to grab a decent frame at a previous event is an all too easy trap to fall in; and while it may give you a more consistent result of different subjects, those subjects would be in the same place, looking all the same in all your galleries – particularly when your are restricted as to where you can go and what you can see.

And that’s not for me.

Personally, I try an avoid those situations. I get impatient if I revisit a familiar place and notice myself shooting like images.

I’ll try to remember to use a different lens or different technique to mix it up a bit. Crouch down, shoot a different direction change my settings…it appears to be fairly simple, the trouble is, the more events you get to, the harder the challenge is to seek out that variety.

…I wanted to get closer, to feel the speed…

No better place to start then, than at the European Le Mans Series during WEC weekend at Silverstone.

I saw this as the perfect situation for testing my creativity; a weekend of practice sessions, an open paddock, free pit walk and a four hour extravaganza to the chequered flag.

It didn’t quite pan out (ha ha pardon the pun) as I was hoping.

If you’ve read my blog from the WEC itself, then you’ll already know that the weekend wasn’t the greatest in regards to the weather. I struggled to work the ever shifting light, as well as the new kit.

At times, I found inspiration really lacking. I am learning that this is one of the hardest parts of motorsport photography; trying to find those morsels of difference and turn them into a something that wows the eyes.

Break it down to the bare bones, and your canvas it’s only different cars lapping the same, unchanging static setting. 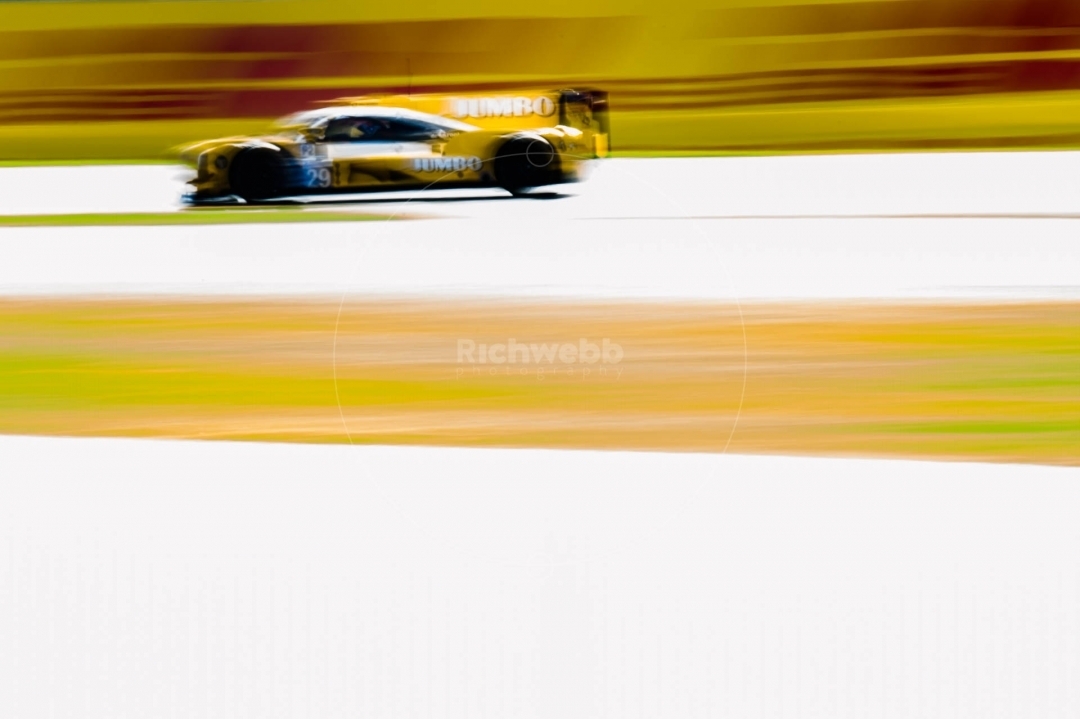 Creatively drained, I decided to try and wake up a bit and get out of what I was finding to be a bit of a doldrum.

Off I hiked down to Maggots and thin famous couple of corners for some high speed action. Get closer and the thrill of speed, smells and noise always wakes you up.

I started off on the infield, at the Loop and managed to find an angle looking down the Donington straight which was of some challenge for a while. Big lens and many frames. I’ve found that capturing images of the cars ripping away (or towards you) very difficult to get right.

But shooting Maggots and Becketts from the inside doesn’t give you the essence of the speed the cars take in to that complex, due to the distance from them.

I wanted to get closer, to feel the speed, so a quick hike to the outside of the circuit and I was pressed up again the fence for a good hour and a half, seeing how slow I could go.

Trying to pan with a car travelling at about 160mph-ish when it is no more than 5 meters from you, is bloody hard. But this challenge caught my attention, and I chirped up. The sun even came out.

That then turned into the theme for the rest of the day. A lazy orange sun, fast cars and a short lens gave me the challenge that I was looking for, and as the sun set lower toward the end of the race, the grandstands of Luffield and Woodcote were bathed in this awesome evening glow to complement the succession of rapid laps perfectly.

Pity, that I was having what I felt was such an off day as by that time, my enthusiasm had waned. Great light is only great if you can make it work for you.

This was just one of those days. Through out my day job, involved in graphics, I often have slumps like this, where you just not feeling the task in hand.  I’ve never been able to put my finger on why it happens, but could guess at repetition and similarity being factors.

You simply have to get on with it and find away to make it work.

They aren’t my best efforts, but I hope you enjoy my gallery from ELMS Silverstone 2017.