Silverstone is a beast of a circuit. 3.6 miles of high-speed, twisted tarmac, adorned with some of the most spectacular corners know to racer and machine.

From a drivers point of view – and I can only speculate here as my experience behind the wheel at the ‘Stone is limited – it is a bucket list circuit. A driver favourite. A classic and always a challenge.

It’s always a challenge to photograph too.

Photogenically, it’s devoid of colour and feature; there is no greenery to speak of,  the blue and grey lattice grandstands are scruffy unless they are packed with the vibrancy that spectators bring and it’s as flat as a pancake. OK, not quite flat; there are a few rises here and there, but it’s not Radillion as the cars pace up the slope from Copse to Maggots.

As you may know, walking round Silverstone is a day out in itself.

The circumference, I would guess, is less than the lap distance, but it would still take the best part of an hour to hot-shoe it. Planning your day is par for the course when you are there, especially if the races are coming thick and fast.

In addition to those little chestnuts of challenge, if the sun is out, Silverstone is like the costa-del-overexposed. If the sun is in, Silverstone blends into scenes of dark grey tarmac, perfectly accented by rolling grey sky. And those huge open skys are all encompassing.

I admit, it’s not that grey and there are plenty of colours and features dotted about the circuit to make use of , but the extremes that it’s exposed expanse presents, adds to the challenge of photographing races with style and panache.

My first experience in front of the wire at Silverstone this weekend for the International GT Open, encompassed all of the above.

I anticipated a tricky weekend of trigger time; my experiences at Brands Hatch earlier in the month demonstrated that well, but I know Silverstone, having spent plenty of time there over the past few years.

Still, taking that fence out of the way isn’t a polaroid to great pics. Not at all. 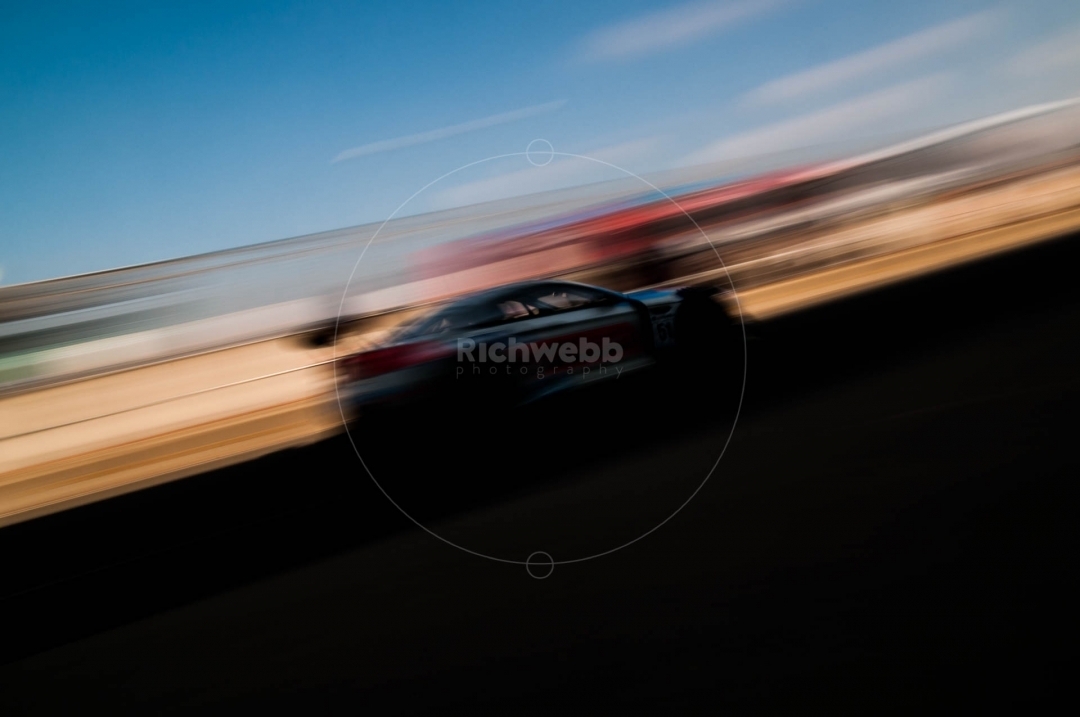 As with Brand Hatch, my kit worked more effectively, however, many other factors come into play, just as they did a few weeks earlier in sunny Kentshire.

What I noticed almost instantly was that those glorious angles you see when panning through the chicken wire aren’t as easy to find once you are in. At Silverstone, the photographers areas are restrictive, and it certainly isn’t a free for all. Sure you can get places the position the grandstands and hordings behind you, but with plenty of narrow ledges and tiny gaps, it’s not even close to a  bowl of cherries.

I thought the outside of Woodcote would be a brilliant spot, shooting up the National…still a fence in the way there.

I walked down in front of the BRDC building looking for angles…all I found was Red Zone and some friendly marshalls. (for those that don’t know, a Red Zone that’s a no-go area for anyone during a live track)

Could I go into the Brooklands Building and get up higher? Denied.

I spent a fair bit of time, exploring the spots I had earmarked as great place to shoot from, yet couldn’t when I finally got there. Pit lane access was a bonus, so I used it as best I could waiting for scenes to present themselves between races.

It was a very sharp learning curve, and it occurred during the first hour of the GT’s that planning my movements about the circuit would be imperative, simply due to scale of the circuit.

That may sound a little cautious from a person who has waited enthusiastically for a chance in front of the squares, but it was the reality.

Just as at Brands hatch, I was learning the circuit all over again, exploring, experimenting, observing and watching.

But that’s what I enjoyed. Where as earlier in the year, I had bemoaned the lack of variety from my local circuit, suddenly I was back in the thick of it. A total junior in terms of knowing where to stand.

If anything, it made me appriciated the skill and patience that shooting quality images requires. Those images that are taken by the inspirational few we all admire; Heath, Rhys, Mason et al is certainly not acquired by simply gaining a pass on a string.

To achieve creative results of their calibre, time and time again, will take a few more visits to the inside. This is most certainly, a long game.

I hope you enjoy my images.

With huge thanks again to Gary at Xynamic for the opportunity.